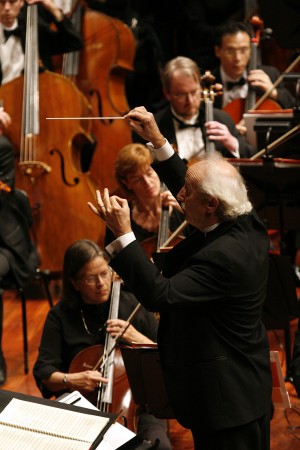 Equally adept at conducting classical and pops programs, Albert-George Schram has led a wide variety of repertoire for many orchestras in the U.S. and abroad.

For many years, Schram was Resident Staff Conductor of the Columbus (Ohio) Symphony and Charlotte Symphony orchestras. He conducted classical, pops, holiday and educational concerts for both orchestras. He has also served as Music Director of the Lubbock (Texas) Symphony and the Lynn Philharmonia (Florida). Most recently, Schram concluded his tenure as Resident Conductor of the Nashville Symphony Orchestra. Previously he has held titled positions with the Louisville Orchestra and Florida Philharmonic orchestras.

Educated at The Hague Conservatory in his native Netherlands, Schram has also studied at the Universities of Calgary and Victoria in Canada, and the University of Washington. His teachers have included Rafael Kubelik, Franco Ferrara, Abraham Kaplan and Neeme Jarvi.

On the classical side, Schram has worked with many distinguished artists, including pianists Lang Lang and Olga Kern and violinist Elmar Oliveira, among many others. His vast performance repertoire has included most of the standard symphonic masterpieces, especially the great symphonies of Gustav Mahler, the subject of his dissertation. He has had a lifelong affinity for performing the great choral-orchestral works, in particular the Requiems of Verdi, Mozart, Berlioz, et al. This, in addition to music by such acclaimed contemporary composers as John Corigliano and Jennifer Higdon.

George currently resides in Florida with his wife, Debbie. Their three children are all grown up! In his spare time George is an avid racquetball player and a certified group-fitness instructor.

"It has always been a pleasure for me to work with conductor George Schram and to attend his concerts. George is an extremely gifted musician with a fine conducting craft. My collaborations with him have always been refined, sensitive and musically rewarding."

George Schram is a pro! ... He loves the music and knows what to do with all styles and genres. He respects the musicians and never wastes their time. Most importantly, he communicates comfortably and intelligently with the audience. He is versatile and quick, and best of all, a genuinely nice person, especially for a conductor. I always smile when I see his name on the calendar, knowing we will put on a good show.

The Dutch-born conductor Albert-George Schram led the Spokane Symphony (in Mahler’s Ninth Symphony) in playing that burned with fury and torment, and one that sang with tenderness, too … the orchestra responded brilliantly for Schram.